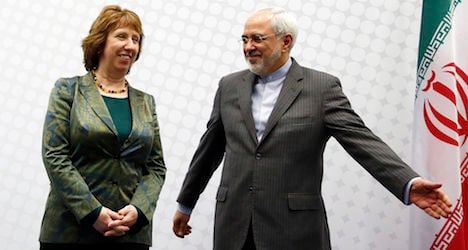 "As we stand now, we have made enough headway to be able to tell our political bosses that this is a process worth continuing," Zarif told reporters.

Both Zarif and Kerry stressed that they still hoped to secure a deal by the Sunday deadline.

Briefing the press earlier, Kerry said that despite some "tangible progress" there remained "very real gaps on other key issues".

He and Obama would now discuss whether more time was needed.

"I am returning today to Washington to discuss with President Obama and leaders in Congress over the coming days about the prospects for a comprehensive agreement as well as the path forward if we do not achieve one by July 20," he said.

Kerry said talks would include "the question of whether or not more time is warranted, based on the progress we have made and how things are going."

He added: "With respect to the issue of July 20, yes, that is still on the table. We are still working and we are going to continue to work."

An interim accord struck in November between Iran and the five permanent members of the UN Security Council plus Germany expires on July 20.

Extending the deadline has always been a possibility in order to keep the parties talking, but Washington in particular has stressed it will not agree to such a move without key concessions from Iran first.

The mooted accord is aimed at eradicating fears that Iran might develop nuclear weapons under the guise of its civilian programme after a decade of rising tensions and threats of war.

Iran denies seeking the atomic bomb and wants the lifting of crippling UN and Western sanctions.

The six powers want Iran to dramatically reduce in scope its nuclear programme for a lengthy period of time and agree to more intrusive UN inspections.

This would greatly expand the time needed for the Islamic republic to develop a nuclear weapon, should it choose to do so, while giving the world ample warning of any such "breakout" push.

Iran on the other hand has stated it wants to expand its nuclear facilities, insisting they are for purely peaceful purposes and that it has the perfect right to nuclear activities under international treaties.

Both sides are also under intense pressure from hardliners at home — midterm US elections are in November — and both are wary of giving too much away after several months of talks.

Kerry, along with the foreign ministers of France, Germany and Britain and the deputy foreign minister of China jetted into the Austrian capital on Sunday seeking to inject some momentum to the negotiations.

This activity can produce fuel for the country's sole nuclear plant or, if further enriched, the material for an atomic bomb.

Israel, the Middle East's sole if undeclared nuclear armed state and which together with Washington has refused to rule out military action, is opposed to any enrichment by Iran at all.

Zarif however outlined a possible compromise in an interview with the New York Times published on Tuesday.

This "innovative proposal" would see Iran essentially freeze its enrichment capacities at current levels for between three and seven years.

Kerry stuck to his guns on Tuesday, saying that nothing short of a reduction in Iran's enrichment capacities was acceptable.

"We have made it crystal clear that the 19,000 (centrifuge enrichment machines) that are currently part of their programme is too many," Kerry said.

A senior US official said last week the programme should be limited for a "double digit" number of years.