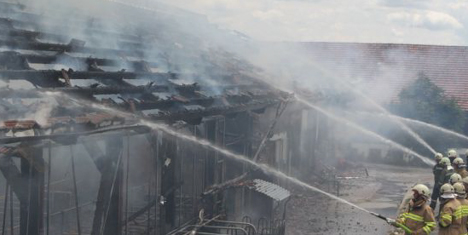 The barn burnt to the ground. Photo: APA

It’s thought the battery exploded in a large stack of hay.

The farmer, along with fire expert Walter Kittl, found the lithium-polymer battery on Sunday in the charred remains of the barn.

"I found that a battery cell had split open. This means that it must have short-circuited, overheated, and triggered the fire," said Kittl.

It’s thought that the model airplane flew into one of the farmer’s meadows around June 20th.

The owners of the airplane reported the crash and alerted the farmer, who found most of the aircraft but not the battery.

Kittl thinks the battery may have been damaged when the farmer mowed the meadow.

Firemen were able to save the farmer's house from also catching fire.