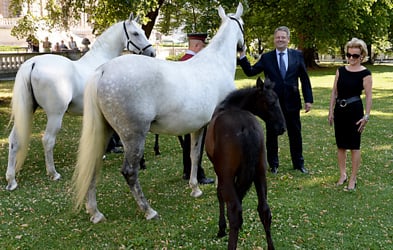 “There will not be much need for mowing the grass,” Elisabeth Gürtler, head of the Riding School, joked.

The horses will be let out for an hour every day except Sundays and Mondays until August 2nd, and are sure to be a draw for the city's summer tourists.

The foals, who are born dark, and later develop their grey-white coats, are still quite shy but their mothers are more confident.

The park lawns will be well-nibbled, but not destroyed as the horses have not yet been shod.

The mothers and babies will be chaperoned whilst they are in the park, and visitors are warned that they are not allowed to stroke them, however tempting that may be.

It’s the second year that the horsey kindergarten has been held in the park, usually they stay in the confines of the Spanish Riding School but Gürtler said her heart went out to them after she noticed them vainly trying to nibble at a few chestnut tree leaves and realised they were deprived of greenery.

From August 2nd the foals will spend the rest of the year roaming the pastures of the Lipizzaner Stud farm in Piber, Styria.

The Spanish Riding School is the oldest riding academy in the world, and the only one where classical dressage has been maintained for over 430 years.

The school takes the “Spanish” part of its name from the horses which originated from the Iberian Peninsula during the 16th century and which were considered especially noble and spirited.

Today’s Lipizzaner stallions are a cross between Spanish, Arabian and Berber horses.