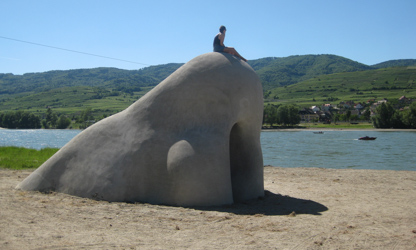 According to a report in the daily newspaper Heute, the four-metre high concrete nose, which officially opens on July 12th, has local FPÖ politician Udo Landbauer fuming.

"The nose is an unnecessary monstrosity, free from meaning and free from sense," he said. "If it was created with public money, then it will be a genuine scandal."

The location for the giant nose was picked near the ferry station St. Lorenz, close to Krems in Lower Austria.

The art group Gelitin, who created the work, is known for the giant pink rabbit which it built on a mountain in Italy in 2005. It's famous around the world as the only pink rabbit which can be seen from space. Giant pink rabbit on a hill in Italy. Photo: Gelitin

The huge 'schnozz' is intended to be part of a giant who is sleeping buried beneath the earth in the beautiful Wachau valley region. The nostrils are big enough for people to enter.

A press release from Gelatin said: "The nose likes to be looked at and photographed, and it likes for people to lean on it and to have a picnic in its shade. It is happy where it is, breathing the Danube, apricots and wine."

The art collective, which was founded in 1993, believes that the sculpture will be a real landmark in the region, and will help draw tourists to the area.