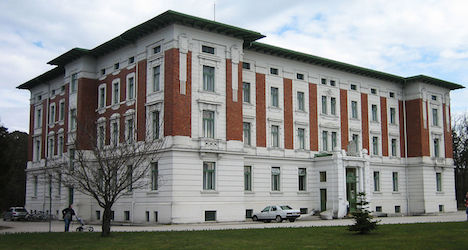 Amstetten's regional hospital. Photo: Dr. Martin Hirsch/Wikimedia
A 39-year-old man was found dead on Wednesday in the courtyard of an apartment building in the Sonntagberg region in the district of Amstetten, Lower Austria.  He had been killed with two stab wounds to the neck, according to a report from the National Police Directorate.
Two bloody knives were seized at the scene as suspected murder weapons.
The suspected perpetrator, a 36-year-old English man, has been taken into custody in the nearby prison in St. Pölten.
According to the State Criminal Investigation Office, several people were drinking heavily on Tuesday evening in a courtyard.  Around 2 a.m., the group relocated to the apartment of a 30-year-old man.
It is reported that a dispute developed between the 36-year-old British citizen and the 39-year-old victim from the district of Amstetten.  They both left the apartment, where it was suspected that a further dispute led to the fatal injuries being inflicted on the victim.
A resident of the house discovered the victim's body on Wednesday morning, and called the police.
Amstetten is notorious as the former home of Josef Fritzl, an Austrian man who imprisoned his daughter in a basement where he held her captive for 24 years in a concealed room, with his serial incest leading to the birth of seven children and one miscarriage.