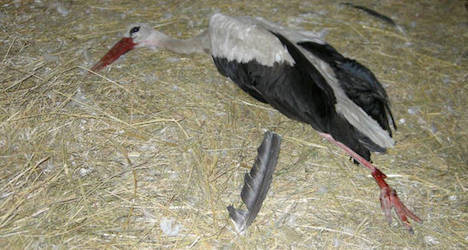 Police in Burgenland in the district of Eisenstadt were called out for an animal rescue operation on Monday.  Motorists had reported an injured stork lying on the road, which had apparently been hit by a vehicle.

Several drivers had already been forced to take evasive action to avoid hitting the animal.

The officers stopped traffic, and succeeded in capturing the injured animal.  Initially, when they approached the stork it tried to fly away.  A number of motorists had previously tried to move the creature, but had failed.

The police used a blanket to settle the animal, and they were able to finally secure its capture in a nearby vineyard.

The stork, whose left leg was broken, has now been treated by a veterinarian, and has been passed into the care of the Rust stork club.

An unnamed spokesman has suggested that Burgenland's birth rate may decline slightly while the stork recovers from its injuries.