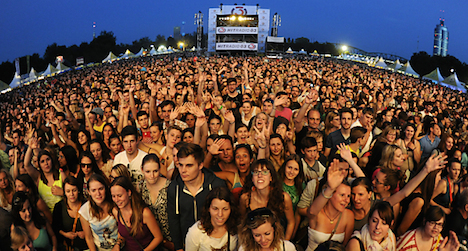 Photo: APA (Oczeret)
Officers of the reserve unit were called at midnight on Saturday after a scuffle broke out among visitors to the Danube Island Festival.
A young man went on a rampage, and was taken into custody. Then his brother attacked the arresting officers, injuring three of them.
The officers had to be taken to hospital for treatment of their injuries. The two rioters were arrested.
In general, the event this year saw no serious incidents according to festival security.  In past years several people drowned after jumping off bridges into the river.
A total of 3.1 million people took part in the festival from Friday to Sunday. This was according to the organisers, the Vienna Social Democrats (SPÖ).

The weather was mostly kind to the visitors of the enormous open air event, which took place for the 31st time. Friday and Saturday were dry and sunny, and while there were some brief showers on Sunday, the good weather mostly prevailed.

Around 1.1 million people were there on Sunday.