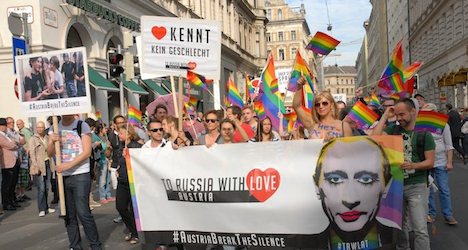 These laws – introduced in June last year – state that it is illegal to discuss or 'propagandise' homosexuality around minors, and have led to a surge in homophobic violence and numbers of youth suicides.

See our PICTURE GALLERY for images from the protest march.

In addition to the anti-Putin protest, there was a march by a small group of Putin supporters, with Russian flags as well as a flag bearing the orange and black colours of St. George, which are widely associated with Russia's victory over fascism in World War II. For more on the dire consequences of Russia's so-called anti-gay propaganda law, this report was shot last year in Moscow by The Local reporter and freelance documentary maker, Kim Traill.