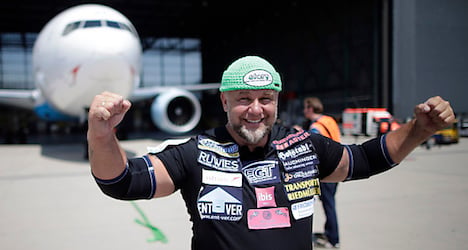 Photo: APA/GEORG HOCHMUTH
It was the 16th world record for the strongest man in Austria. He moved the largest twin-engine aircraft in the world – 63.7 meters long, and with an unladen weight of 142 tons – purely with his muscular strength.
The 44-year-old Salzburg native had prepared for five months solely for this five minute-long strength event.  His daily program included two training sessions of three hours each – mostly on the ergometer (rowing machine) and weight training.
"Now I don't feel so good because I'm extremely nervous. I'll be glad when it's over," Muellner said shortly before his world record attempt.
Despite the great effort, Muellner hadn't lost his sense of humour.  "I have already given the aircraft a kiss. This is my new friend," replied the Austrian Rock to the question whether he had already made friends with the Boeing 777 in training.
The hardest thing in this world record attempt was its execution due to the high security arrangements at the airport, so he thanked the Airport authorities and Austrian Airlines. "Without them, the project would not be possible."
At a quarter to two, 15 minutes earlier than expected, a rope was attached to the aircraft.  Muellner then pulled the plane 14.5 meters out of the hangar, giving him his new place in the record books.
According to project leader Wolfgang Christian Bauer, no man has managed such a feat before.
Unlike past records, Muellner required no medical care immediately after the day's performance.  "It was extremely brutal, but now I'm fine," were his first words after completing the pull.
The 'Blue Danube' stunt will not be the last project of the Austrian Rock. "I'm not young anymore, but I am healthy. There are new goals that are perhaps even larger than the Boeing," the extreme athlete announced.
The 'Austrian Rock' has previously towed a tram from the Wiener Linien, and has used his pure brute strength to set Vienna's Giant Ferris Wheel in motion.