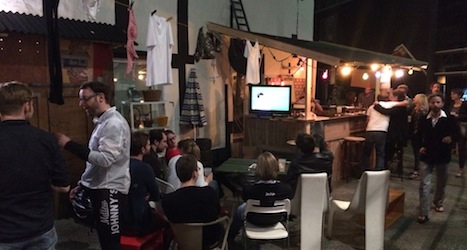 Photo: Gernot Saiko
The World Cup is in full swing and every nation — including Austria — has their eyes on Brazil. But what exactly do we know about the reality of life in the South American country?
Do we only hear about the constant parties, the beaches with good weather, the rhythms of samba and the skills with a football? Or are we aware of the stark economic and social contrasts that pervade Brazilians' day-to-day existence?
Gernot Saiko had his doubts. The restaurateur decided to call attention to the incongruity of supporting a country that spends €10 billion on a sporting event, when over 22 million of its inhabitants live on less than €1.20 a day, by creating a make-shift favela in his Café Luise im Kunsthaus, in Graz.

"Everyone knows how FIFA acts and who profits from the federal investments on such occasions. I wanted to turn the tables, to expose the conflict between the interests of FIFA and those of the people. That's why I decided to build an artificial slum in Luise im Kunsthaus", Saiko told The Local.

"I didn't use any sponsoring or government incentive – nor take any tax money – for this art project was to me very, very important. We have no video walls, rather old TV models. Not a single rented decoration, but wood, tires and cardboard sorted out from the municipal waste disposal center."

The redecoration/art project baptized as 'Luise im Abseits' ('Luise in offside') has received mixed reviews. On the café's Facebook page, Erwin Posarnig writes that Luise im Abseits is just "a marketing ploy and brings too little as reflexive artistic endeavor".

His comment is countered by the enthusiasm of Christiane Rittner-Portschy, who considers Luise im Abseits a "genius idea" and says that "at least now, one has a chance to watch football from a slightly different angle".

"There are those who only wish to see the bad in everything and others that can see the good. I don't know all those who are commenting on the project, but I doubt that any one of them has ever been to a favela", says Saiko.
"I didn't want our project to be cynical and that's precisely why I neither took money from sponsors nor used pictures of a particular or specific Brazilian favela as a one-to-one model for Luise im Abseits."
The first building phase of Luise im Abseits was completed in five days. But in similar fashion to the temporary constructions seen in Brazilian slums, it isn't quite finished yet.
"Guests bring their old equipment and help us to install it. We add new things every day and will be complete only by the World Cup's final", says Saiko.
By Juliana Rocha