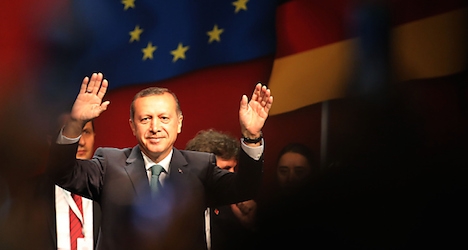 What's not usual is the security warning that has been sent to all staff, advising of delays and possible security issues surrounding the controversial visit Thursday of Recep Tayyip Erdoğan, Turkey's prime minister.

Two major demonstrations have been planned by Erdogan opposition members.  In addition, Austrian politicians have been calling for the Turkish government to contribute towards the cost of policing Thursday's activities, which has been estimated at more than half a million euros.

This is to inform staff and delegates that on Thursday, 19 June 2014, at the invitation by the Union of European Turkish Democrats (UETD), the Turkish Prime Minister Erdogan will deliver a speech in the Albert-Schultz-Halle, Kagran (close to the Donauzentrum).

Furthermore, a Public Viewing is being staged in front of the Albert-Schultz-Halle for an additional 10,000 people.

Vehicle traffic and public transportation will be affected as follows:

• As of 13:00 hours, the trains of subway line U1 will not stop at the station “Kagran” – the station will be temporarily closed to the public.

Passengers are advised to follow announcements by the Wiener Linien (details are also available at: www.wienerlinien.at/).

In response to the events taking place in Kagran, two demonstrations have been organised as follows:

The demonstrators will move at 15:00 hours towards Donaustadt and march along the route Praterstern/Venediger-Au-Park – Lassallestraße – Reichsbrücke – Wagramer Straße – Siebeckstraße. This demonstration is expected to last until 21:00 hours and the route will be temporarily closed to vehicle traffic.

• The second will commence at 13:30 hours at Herbert-von-Karajan-Platz near the State Opera House in the 1st District. Approximately 1,000 people will then march along the route Opernring – Burgring – Dr.-Karl-Renner-Ring – Universitätsring – Sigmund-Freud-Park, at the Votivkirche.

This demonstration is expected to last until 17:00 hours and the route will be blocked to vehicle traffic. Staff and delegates are advised to avoid the above mentioned areas and seek alternative routes home.