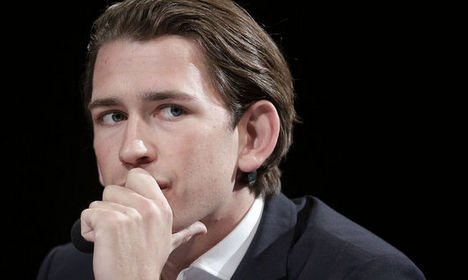 On Tuesday, the foreign ministry confirmed a report by the newspaper Kronen Zeitung. A meeting was planned for Friday, said the ministry.

According to the ministry, Kurz would use the meeting to insist on Austria's standpoint on integration. Kurz had already made his opinions clear to his Turkish counterpart, Ahmed Davutoglu, before Erdogan's trip.

On Monday, Kurz said again that he hoped the Turkish prime minister would choose his words wisely to "improve the integration climate, rather than make it worse".

Erdogan is due to hold a speech in the Albert-Schulz ice rink in Vienna's 22nd district on Thursday. The 7,000 free tickets for the event were all gone on by Tuesday evening. Another 10,000 people were expected to gather outside to watch Erdogan's speech. Erdogan, who already made similar appearances in Germany, is expected to try and rally support for the upcoming presidential elections in Turkey.

Turkey only recently allowed Turks living outside the country to vote. According to the media service centre "New Austrians", there were around 90,000 Turkish citizens living in Austria who were old enough to vote.

Two demonstrations against Erdogan are planned, according to police. One of them, consisting of Turkish and Austrian groups, is expected to include 10,000 people, organisers said.