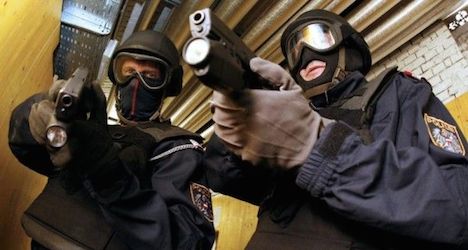 Gabriel E. (49), an ex-cop from Vienna's elite WEGA unit, had retired from the force after being shot, and went into the private security business.

According to court testimony, he spent several years in Gabon and Equatorial Guinea, where he was profoundly moved by the plight of the people in those countries, describing them as "the people who have nothing."

Despite writing many letters requesting charitable assistance on behalf of the impoverished in Africa, the defendant was frustrated in his attempts to help them.

After returning to Austria, he met in a church a 35-year-old woman, Tamara S., who also wanted to help.  Inspired by Gabriel's dream of establishing an orphan children's home in Gabon, Tamara began to prepare herself for a new life in Africa, by acquiring a driving license, studying English, and training as a paramedic.

Gabriel discussed various options with Tamara, who at their initial meeting was working for Loomis, a security transport company.  Gabriel also had worked for the same company on a brief contract, and therefore the two possessed considerable insider knowledge about the security precautions and alarm systems of the company.

Together, the pair hatched the plan of robbing a Loomis armored transport vehicle, intending to take the proceeds with them to Africa to fund the orphanage.

They carried out the crime on the evening of 23 December 2013, when the pair, armed and wearing masks, held up the drivers of a secure transport operated by the woman's former employer, which was being used to refill ATMs.

The pair allegedly escaped with over €3 million according to a report in Vienna Online. One of several suitcases filled with money recovered by Police.  Photo: Police (LPD)

Police investigators were sceptical that such a robbery could be undertaken by anyone without an enormous degree of inside knowledge.  The high amount of professionalism displayed showed they were dealing with someone trained and skilled in such operations.

Finally, although the perpetrators were masked, the fact that one of the pair was obviously female and of slight build led them to match descriptions with a former employee of Loomis.

After confessing, the pair were both found guilty, and each was sentenced to eight years in prison.  In sentencing, judge Claudia Zöllner noted that the alleged intention of using the money to help orphans in Africa was "no respectable motive."