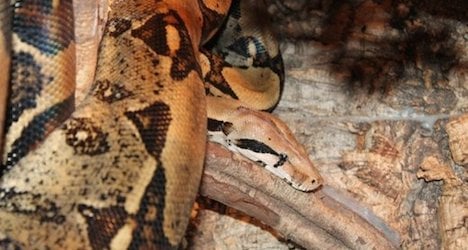 Photo: APA
The workers called the fire brigade, who captured the snake, then handed it over to the ASPCA animal rescue service.
The owner is as yet unknown.  It is suspected that the reptile had been discarded.
"The snake is about 220 centimeters long, is healthy and its nutritional status is also good," said Louise Petrovic from the ASPCA.
"She is now with us in Vienna's animal shelter.  We can not say something more precise, as it is very important to carefully consider how the snake eventually got there, and that the statutory provisions governing the situation are observed during the subsequent disposition of the animal."
The find triggered the involvement of the animal rights organization Four Paws (Vier Pfoten), which campaigns for a ban on the private keeping of exotic animals.
Until such a ban is in place, it calls for a mandatory proof of expertise for owners of reptiles, and they seek to strictly limit the private purchase of exotic animals.
The most recent case shows "once again, that the holders of these animals are apparently overwhelmed," said Indra Kley of Four Paws.
"Snakes, lizards, spiders, etc. have very specific needs that cannot be properly handled in a regular household. As long as they are small, the animals are often easy to maintain. But when they grow larger, they become a burden to their owners," she added.
Such animals were being encountered more often, said Kley.  Last week, a Styrian found a python in a trash container. The owner, who finally came forward, stated that he had thought the snake was dead, and therefore disposed of it.