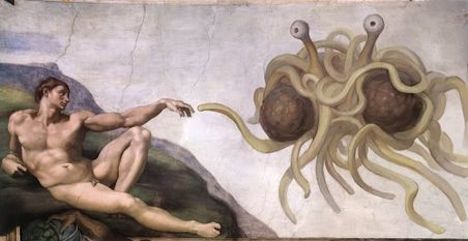 The Kultusamt authority ruled Wednesday that the "Church of the Flying Spaghetti Monster" was not a proper "Church" because it is not a Christian religious community.

The organisation was founded in the United States to poke fun at religious dogma and to campaign against the teaching of creationism in schools, and now has chapters in several other countries.

The Flying Spaghetti Monster is a satirical deity "worshipped" by the church's adherents, who are called "Pastafarians".

It first appeared in a 2005 open letter written by student Bobby Henderson to the Kansas Board of Education in protest over its decision to teach Intelligent Design in schools.

Henderson argued his belief that the monster created the universe was no less valid than Intelligent Design, a form of creationism, as both theories had no scientific merit.

In Austria the group made headlines in 2011 when one of its adherents, Niko Alm, won the right to be pictured on his driving licence with a pasta strainer on his head.

Alm has since become a lawmaker for the NEOS opposition party in the Austrian parliament, although last weekend he stepped down as the party's spokesman on religious affairs.

The chapter's "Upper Macarono" Philip Sager said in a statement he regretted the Kultusamt's decision but said that he could not comment further because he had not been informed officially of the ruling.