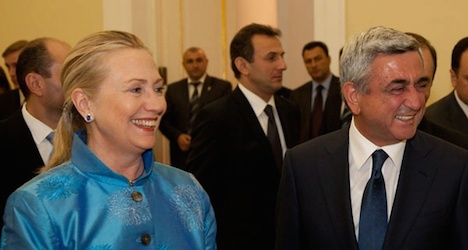 He is due to meet with his Austrian counterpart Heinz Fischer and Chancellor Werner Faymann. Sargsyan is also due to sign several economic agreements.

The Armenian president will be received by Fischer with military honours in central Vienna on Wednesday. After talking in private, the two presidents will hold a press conference.

Increasing economic cooperation will be one of the main topics during the visit. Several bilateral agreements are due to be signed in the presidential Hofburg, including a "declaration of friendly relations and partnership", between Austria and Armenia, a shared plan of action for science, research and economy, and an air traffic agreement.

On Thursday, Fischer and Sargsyan will attend an Austrian-Armenian economic forum in the Austrian Economic Chamber. In the afternoon, the Armenian president will meet with Chancellor Faymann.