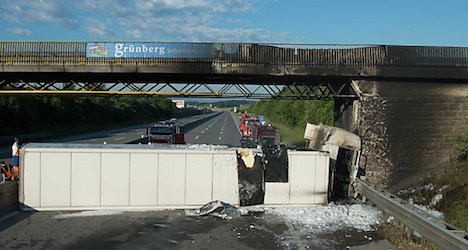 Photo: APA/FOTO-KERSCHI.AT/WERNER KERSCHBAUMMAYR
According to the highway patrol in Haid, a truck  crashed for some unknown reason into a bridge between Allhaming and Sattledt and caught on fire.  Police blocked the highway for several hours.
In the accident apparently no one was injured, but the bridge has been damaged. The recovery work was "complicated," said a police spokesman.
Due to the blockage along the west highway traffic will be diverted via the A25.
The truck was heading in the direction of Salzburg when it crashed and burst into flames. A large contingent of firefighters were called out and were able to extinguish the fire quickly.