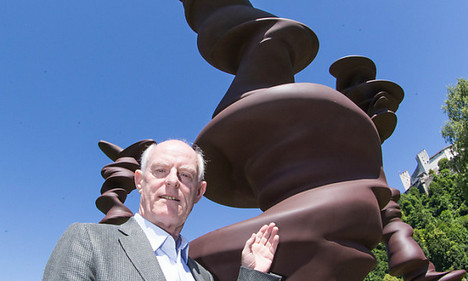 Tony Cragg in front of one of his sculptures. Photo: APA

Cragg presented his work on behalf of the Salzburg Foundation, which has just launched its five-year Krauthügel Art Project.

The temporary open-air exhibition will be displayed on the Krauthügel, a large meadow area at the foot of Salzburg castle, until September 29th.

Cragg's work is already known in Salzburg – his bronze sculpture Caldera sits on Makartplatz in front of the State Theatre.

For the Krauthügel, Cragg (who currently lives and works in Germany) has made three large-scale bronze works called Runner (weighing 2.5 tonnes), Mixed Feelings (four tonnes), and Points of View.

The latter consists of three separate objects, each about seven metres high and weighing three tonnes, which create a dramatic visual effect when viewed with the Hohensalzburg castle and the mountains south of Salzburg in the distance.

The sculptures cost around €100,000 to create, but the artist himself received almost no salary, the president of the Salzburg Foundation, Karl Gollegger, told the APA press agency.

"The work remains the property of the artist. We have invested our sponsorship money into the material – and also helped fund the transportation of the sculptures to Salzburg," he said.

The Abbey of St. Peter owns the Krauthügel – and the Foundation has signed a five-year contract to rent it.

"We can’t say yet which artists will be exhibited in the next five years, but I want all five continents to be represented. With Cragg we have Europe, so perhaps next year we will have a Chinese artist,” Gollegger said.