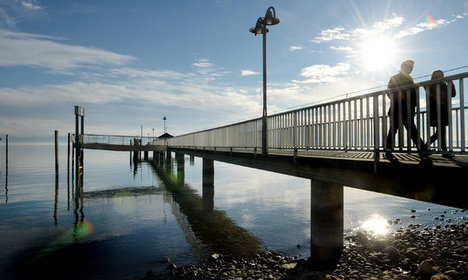 The 73-year-old crossed the Austrian border in a Swiss car belonging to his son-in-law – but by failing to declare that he was driving a car that was not registered in the EU, he violated customs and tax laws, according to a report in the German paper Westfalen-Blatt.

The incident happened three years ago, at the border of St. Margrethen (Canton St. Gallen) and Höchst in Vorarlberg.

However Dieter Johann auf der Heide is still furious, as he filed an appeal but just weeks ago the Austrian Federal Finance Court ruled that it is unable to return the money, as it was legally obliged to take it.

It is illegal for an EU citizen to drive a car that has not been registered in the EU, without first notifying customs, according to the Westfalen-Blatt.

The man had been visiting his daughter, who lives in Switzerland, and had agreed to transport some tiles to the family’s holiday house in Fußach, Vorarlberg. He borrowed his son-in-law’s Mercedes for the job.

“A customs official told me I could only continue my journey when I had paid €14,767, and that if I didn’t I could expect a conviction," the German man told the newspaper. His son-in-law came and paid the money for him.

The Austrian customs authorities said they could not comment on individual cases but told the APA press agency that "cases like this are unfortunately not rare". The Customs Office at Feldkirch said the payment was not unusually high – "we've also had Ferraris". The amount of tax and customs duty payable depends on the value of the vehicle.

Legally, the car was regarded as a commodity, on which neither tax nor duty had been paid in the EU. In effect the German man was treated as if he was attempting to smuggle the car into Austria.

Customs officials have advised drivers to call border controls or local motoring clubs ahead of trips if they are worried they might fall into the same category. “Information is everything," one official said.

Lawyer Michael Nissen, from the German motoring association ADAC, said that very few drivers are aware of the rule, but that he has heard of similar cases, particularly in Austria.

“This could happen to drivers anywhere in the EU but from our experience Italy and France are less likely to adhere so rigidly to the law,” he said.

"We advise travellers who rent a car in Switzerland and want to cross the border to make sure the car they are driving has authorization from an EU country. Most rental companies will have such cars.”

IMPORT
How to post packages between Austria and the UK post-Brexit
Url copied to clipboard!