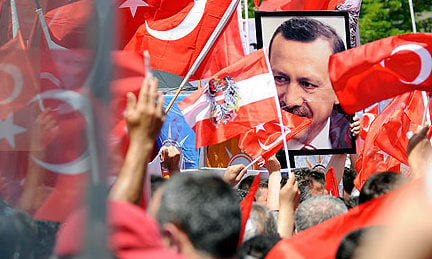 Erdogan supporters at a demonstration in Vienna. Photo: APA

The online edition of Die Presse newspaper said on Thursday that Erdogan would not be meeting with President Heinz Fischer – who will not be in Vienna at the time – or with Chancellor Werner Faymann. The newspaper was quoting diplomatic circles.

According to the UETD, which is considered to be the extended arm of Erdogan's Justice and Development Party (AKP), the prime minister will be holding a speech for Turkish people in Vienna on June 19th.

As of January 1st, there were 114,682 Turkish citizens living in Austria, according to Statistics Austria.

The UETD said on its homepage that it was preparing for the visit, and that the venue will be announced in the next few days. According to Die Presse, Erdogan will continue to France, to meet with French President Francois Hollande.

It’s thought that the Turkish presidential election in August is the reason for Erdogan’s visit. It is expected that he will run for president, although he has not confirmed that. The votes of the Turkish community living abroad could be important.

Recently Erdogan visited Cologne in Germany, and gave a speech to several thousand supporters. Thousands of people also gathered to demonstrate against his presence, accusing him of a disregard for human rights and freedom of speech.