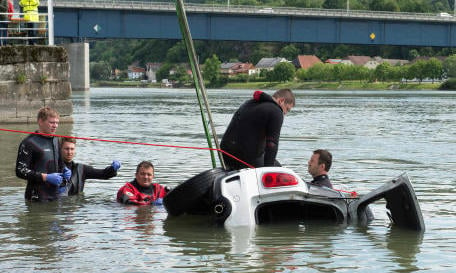 The mini was pulled from the Danube. Photo: APA

The accident happened shortly after 7am in Aschach an der Donau, on the Eferdinger side of the Danube. Eyewitnesses said the car was a white mini, which suddenly plunged off the road and into the river.

The witnesses tried to help, but said the car sank within seconds, just as two barges were passing by, and the car was pulled under by the strong current.

Forty men, including firefighters and divers are involved in the search, but it has been made difficult due to poor visibility. One of the barges had to be lifted out of the water in order to get to the mini, but the driver was not inside.

Andreas Moser, who is leading the search team, said they are searching an area of 1,500 meters.