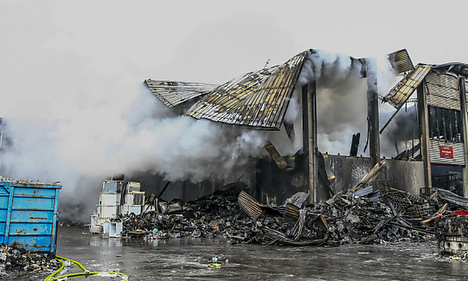 Seventeen fire departments, and more than 220 task forces, battled the fire for several hours. The operation was made more complex as parts of the roof began to collapse. Three firefighters were slightly injured – two with smoke inhalation and one with a hand injury.

The fire started at the Saubermacher site at 10pm on Wednesday. Firefighters were able to isolate the blaze and stop it spreading to other buildings. Police closed part of the A2 motorway for several hours due to thick smoke.

Company spokeswoman Jutta Hackstock-Sabitzer said smoke from the fire posed “no danger to the environment or humans”, and that they had taken advice from experts as electrical parts had been involved in the fire. Around 60 firefighters were still working on Thursday morning. An investigation into what caused the fire can only begin once the site has been declared safe.

“The exact cause of the fire and the extent of the damage will need to be determined in the next few days – but we expect it to run into millions,” Hackstock-Sabitzer said. She added that work would continue as normal at the unaffected areas of the site.