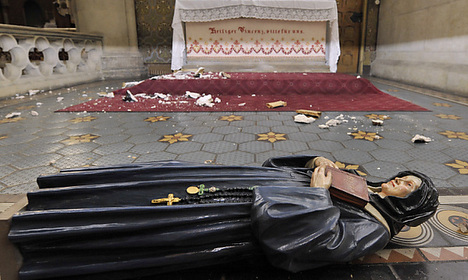 A damaged statue in one of the churches. Photo: APA

Court psychiatrist Gabriela Woergoetter said the man was suffering from a mental disorder, similar to paranoid schizophrenia, when he vandalised the churches.

At the end of March the 37-year-old man, who originally comes from Ghana, went into St Stephen's cathedral (Stefansdom) and three other Catholic churches and knocked over statues of saints, in many cases destroying them. He also damaged other sacred objects including a baptismal font and a crucifix. The cost of the damage came to around €150,000, according to the archdiocese.

He was arrested the following week and confessed to the vandalism. He told police that “God had instructed him” to destroy the images of the saints.

"He's so sick, according to the psychiatrist’s report, that he did not know what he was doing," the man’s legal representative, Roland Friis, said. The prosecution has already dropped the claim for the cost of the damage, because of a lack of accountability, Friis added.

The man will however have to appear in court later in June for other “minor offences”, which include resisting arrest and damaging a police patrol car. He has already spent two months in prison.