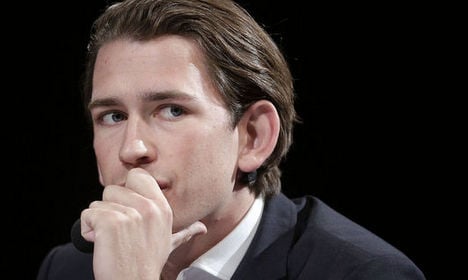 Sebastian Kurz, of the conservative People’s Party (ÖVP), was born in Vienna and brought up in the city district of Meidling, where he still lives. His parents worked as a teacher and a technician. After graduating in 2004 he completed obligatory military service. While he was studying law, he became chairman of the youth branch of the ÖVP.

Between 2010 and 2011 he was a member of Vienna's city council. He campaigned under the slogan "Black is cool" (black is the colour of the ÖVP) and distributed condoms.

Kurz is active on Facebook and Twitter, comes across as confident and friendly, and his trademark is his slicked-back hairstyle.

When he was just 24 he was appointed to the newly created post of Minister for Integration – and became the youngest ever member of the government, to the derision of many commentators.

He soon overcame the sceptics, as well as grandees from his own party who had initially been displeased at his appointment. His slogan as Minister for Integration has been "Integration through performance." Since a reform of citizenship law well-integrated foreigners are now able to gain Austrian citizenship more quickly.

Kurz wants more rights for Muslims (the second largest religious community in Austria), and he wants immigrants to be able to apply for better jobs. He is, he says, “against any form of discrimination”.

He has persuaded Austrian celebrities with a migration background to visit schools and tell their success stories. However, critics complain that he is afraid of tackling some of the more difficult issues – and that in cases of family deportations or contentious asylum cases he will always defer to the Interior Ministry.

Fifty years ago the first ‘guest workers’ arrived in Austria from Turkey. Kurz told Der Standard that “these people have made ​​Austria more diverse, and they boosted our economy. But we should also be critical of what Austria has done for them – no one really asked whether guest workers should be learning German, or how their children could be supported, so that they could get a good education. If we had introduced a good integration policy at that time, we could have saved ourselves a lot of problems.”

Kurz is currently working on a Professional Recognition Act, based on German law, which aims to make the current system of applying for work in Austria clearer. The key point is that the rules should also apply to people who arrive in Austria from outside the EU.

At present someone from outside the EU who is qualified in a profession and wants to work in Austria has to first apply for their qualifications to be recognised, and then can apply for a job. Kurz also wants to make sure that people who are working in jobs that are not regulated are able to apply for a qualification.

He thinks it is key that all children in Austria are able to speak German when they start school – which might mean a second year at Kindergarten, depending on the available budget.

In interviews Kurz has always said he doesn’t want to be a career politician and doesn’t intend to stay in parliament for more than ten years.