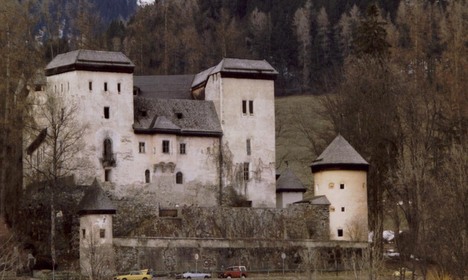 The memorial plaque, designed by sculptor Anton Thuswaldner, lists the names of 14 people killed by the SS on and after July 2nd, 1944, along with the location of their deaths.

Initially, the plaque was intended for the courtyard of the Goldegg castle.

This plan met with strong resistance from the community however, which has remained deeply divided ever since the war ended.

Andreas Huss, Chairman of Salzburg Regional Health Insurance (SGKK) – which runs a convalescent home in Goldegg – has been following the debate with incredulity.

Huss has now offered to place the plaque in a prominent position in the grounds of the home, on a popular walking track leading to the centre of Goldegg.

'Social security was set up after 1945 to prevent the emergence of totalitarian regimes,' said Huss. 'We think it is therefore very important to remember those who rebelled against and fell victim to the Nazi regime.'

Brigitte Höfert, the daughter of one of the deserters commemorated on the plaque, is delighted.

Her father, Karl Rupitsch, one was of several Wehrmacht soldiers who fled to the forests in the mountains around Goldegg after refusing to continue to fight for Hitler.

Rupitsch was captured and killed soon after in Mauthausen concentration camp.

Other Wehrmacht deserters were slaughtered on the spot by SS commando units.

The now 74 year old Höfert – who had long ago lost hope that the memorial would ever be erected – is extremely happy with the health insurer's proposal.

'It's still possible to lay the memorial stone for my father and the other victims before the 70th anniversary on July 2, 2014,' she said. 'I am very grateful.'

The relocation is scheduled for June 27th.

A heated argument has been raging for weeks between historian, Michael Mooslechner, Cyriak Schwaighofer, Chairman of the Goldegg Cultural Association, and local Goldegg politicians.

'Unfortunately, among the descendants of the victims there are sometimes conflicting opinions as to how to deal with the commemoration,' Fleissner told the ORF.

Indeed the current official local and municipal chronicles of the events of 1944 still use Nazi jargon, referring to deserters as 'nuisances'.

Fleissner had recently proposed the memorial be located near the relatively distant Böndlsee, where the first murders took place in 1944.

Goldegg Cultural Association head, Schwaighofer, who is also the Greens club leader in the parliament, believes the memorial stone should remain in the castle and is trying to convince his opponents to accept this option.

Historian, Mooslechner fears this approach will take too long.

'Anything that advances the reprocessing of the events of July 2, 1944 in Goldegg is to be welcomed. This initiative also gives us time and space to continue the discussion in peace.'