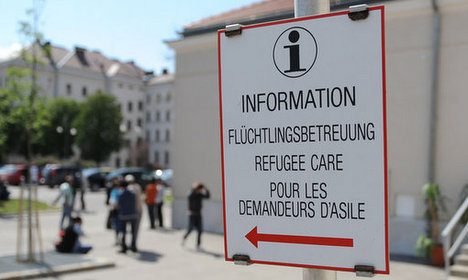 Over 1100 people are currently being housed in the centre, more than twice the figure agreed on by Lower Austria and the Interior Ministry. Meanwhile other states are not fulfilling their quotas.

"More than 450 people are waiting for accommodation. The agreement between federal and state governments which regulates the accommodation of asylum seekers simply does not function, and has not for years," says Babler.

"Austria needs a law which will allow the federal government to force the states to adhere to their agreements," insists Babler, who suggests the Interior Ministry should have the option to apply sanctions to states not fulfilling their responsibilities.

This morning the Interior Ministry took its first step towards relieving the overcrowding in Traiskirchen with the creation of 100 places for refugees in the Tirolean town of Fieberbrunn, near the ski resort of Kitzbühel.

An already existing quarter in the municipality of Fieberbrunn will be converted from country accommodation into a state care facility.

Interior Minister Johanna Mikl-Leitner from the Austrian People's Party (ÖVP) is convinced other states are actively working to organize accommodation, in particular for refugees fleeing the civil war in Syria.

The Greens state representative for Salzburg, Martina Berthold, is currently searching for places for 120 refugees. She acknowledges the problem is urgent, and says that as soon as she finds somewhere she will mobilize the mayor.

"I have been talking to the community association president and told him that we cannot always be in denial. We need to find a way to solve this together."

"Austria needs more small reception centres where people can be well looked after, which are more humane for the refugees – not these mass dormitories."

"Refugee protection is the task of the Republic, and currently they are not taking it seriously," she added.

Currently about 1,750 asylum applications are expected in May, an increase of 31 percent compared to April.

There are around 52,000 refugees living in Austria and 22,000 asylum-seekers in the country are waiting for authorities to decide their future.