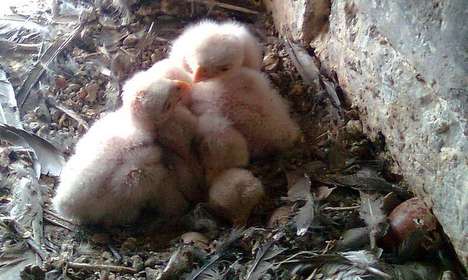 In rural areas, kestrels usually build nests in rock crevices or abandoned crow's nests, typically surviving on a diet of field mice, large insects or small lizards. Since 2010, Vienna University researcher Petra Sumasgutner has been observing over 400 kestrel nests in Vienna. The results of her research have been published in the journal Frontiers in Zoology. Sumasgutner found Vienna has the highest density of breeding pairs in any major European city. "The breeding success of the kestrel is significantly lower than in rural areas however," reported the scientist. "There is simply not enough prey available to feed all the young birds which are hatching in the city area." Examinations of the faeces of kestrels living in the inner city – who primarily hunt by day – show a relatively small proportion of rodent remains. "The added effort required to catch prey other than rodents, birds for example, affects the breeding success of kestrels in central Vienna," writes Sumasgutner in her article. "Obviously it is difficult for kestrels to assess the availability of food in their search for nesting sites," she added.