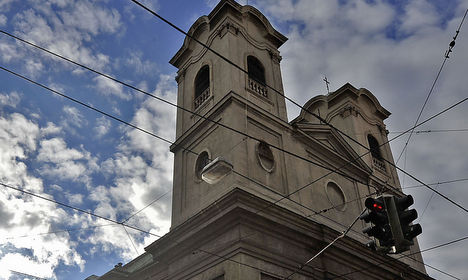 Cardinal Christoph Schönborn took part in a liturgical ceremony at the church on Tuesday, along with the bishop of the Serbian Orthodox Diocese of Austria and Switzerland, Andrej Cilerdzic. The Neulerchenfelder church is the fourth Catholic church in Vienna to be given to the Serbian Orthodox community as a part of a reform process by the Vienna Archdiocese. The gifting of churches comes in response to demographic changes in the city, which have resulted in decreased numbers attending Catholic services. Neulerchenfeld's final Roman Catholic mass took place on March 9th 2014, in front of a full congregation. Parishioners have since been attending the nearby Church of Mary. Further donations of churches are probable from 2015 as more of Vienna's 172 parishes merge due to dwindling worshipper numbers. The Our Lady of Victories Church on the Mariahilfer Gurtel has already been given to Vienna's Indian community, and Romanian Orthodox services have begun in the Antonius Church in Rudolfsheim-Fünfhaus. Parishioners at Neulerchenfelder Church unsuccessfully appealed to the Vatican to prevent the donation. According to the ORF, Cardinal Schönborn previously said he believed the gift of the Neulerchenfeld church was "awkward".