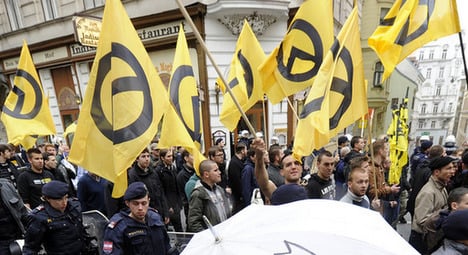 Last Saturday a march by the group in central Vienna resulted in clashes between protesters and police after it was obstructed several times by a left-wing counter-demonstration.

"A group like this should have been banned a long time ago," Häupl said at his weekly press conference. "This is a neo-fascist organization that quite clearly falls under the prohibition act," he added.

The Verbotsgesetz (Prohibition Act) is an Austrian law which banned the Nazi Party and aimed to suppress any potential revival of Nazism.

The present law, which was updated in 1992, prohibits Holocaust denial as well as the deliberate belittlement of any Nazi atrocities.

Häupl said that in his opinion Saturday's demonstration should not have taken place, although he stressed that was not his decision to make: "I can not prohibit clubs, parties, or demonstrations."

At least one left-wing female protester and a police officer were injured, and 37 left-wing protesters (including two minors) were arrested during the march, according to police reports.

Greens justice spokesman Albert Steinhauser called for police officers to wear their service numbers on their uniforms, so they could be identified, and not be "unjustly protected by anonymity".

The mayor said that for him the most important issue now is how to avoid violence breaking out in the future. "We'll have to sit down with all sides, I don't think it's just the police who are to blame here."

SPÖ Justice spokesman Hannes Jarolim said "we should all be glad that young people want to prevent these anti-democrats from marching through Vienna's historic sites."

But he said that he was outraged that they should have to fear for their physical safety. "Reports and images from the march suggest that police were in a highly emotional state," he said.

He added that he was doubtful that the police had used reasonable force.

Die Identitaere Bewegung is a young political movement which believes that foreign cultures should be kept away from their own, in order to preserve an ancestral identity. They spread an anti-Islamic, anti-immigration message via social media. Their logo is the Greek letter lambda, and their colours are black and yellow.

In Vienna and Graz, the movement has around 60 official members according to Die Presse. In Salzburg there are 15 members. The number of sympathizers in Austria is likely to be at least 1,000.