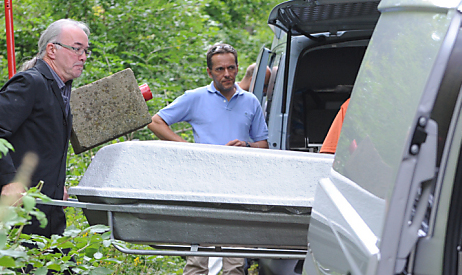 Rebasso's body was found in a wooded area near Königstetten in Lower Austria. File photo: APA
Erich Rebasso disappeared on July 27, 2012 after leaving his office in central Vienna. It's thought he died after he resisted his kidnappers in an underground car park, they put him in a headlock, and broke his neck.
Rebasso's family was given a ransom demand for €435,000 but Austrian police found the lawyer's body in a forest outside Vienna before the money was paid.
Russian police later detained Alexander M and Pavel V, both in their 30s, in connection with the murder, while the pair were travelling in Moscow.
The prosecution in Moscow took up the blackmail case since the two men were arrested in Russia. Rebasso's body had not yet been found at the time of their arrest, so the only charge against them was for blackmail.
Both men confessed to killing Rebasso, and said they killed him by accident while they were trying to abduct him.
Police tracked them down after traces of the lawyer's blood were found in an Austrian rental car they had hired.
It is believed they were hired for a contract killing on behalf of a client who had lost money in a pyramid scheme that Rebasso had been accused of heading, that allegedly cost organized crime bosses large sums of money. However, he, and his family always denied his involvement.

The two men were charged in Russia, as the country's legislation doesn't allow Russian citizens to be extradited.