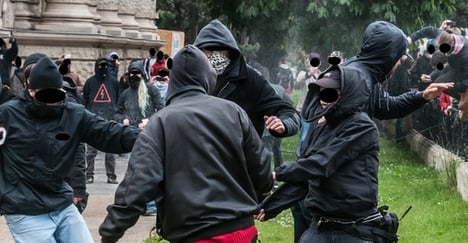 Protesters in Vienna on Saturday. Photo: Police
The left-wing group Offensive gegen Rechts (Offensive against the Right) accused the police of using excessive violence, saying that they beat up counter-demonstrators, arrested dozens, and used pepper spray and tear gas.
At least one left-wing female protester and a police officer were injured, and 37 left-wing protesters (including two minors) were arrested, according to police reports on Saturday night.
Thirty-six were released again on Sunday. One protester is still in the Josefstadt prison, after attacking a police officer.
Der Standard reported that one female protester who was visibly pregnant was knocked over by the police and then taken to hospital after experiencing abdominal pains. She was reported to have suffered a miscarriage that evening, but this was unconfirmed.
A group of woman complained of being 'kettled' by police in the Josefstädter Straße for no apparent reason.
Greens justice spokesman Albert Steinhauser said that police officers should wear their service numbers on their uniforms, so they could be identified in cases like these, and not be "unjustly protected by anonymity".
Die Identitaere originally planned to march from Westbahnhof down the shopping street Mariahilferstaße towards Vienna's historic centre. However, due to the counter-demonstration, the police had to guide the right-wing group down the side streets instead. They then ended their demonstration at the Volkstheater.
Hundreds of policemen closed streets and worked to keep the two groups apart. According to the reports, there were around 100 right-wingers, who were protesting against EU policies and "mass immigration" to Austria. Around 1,000 people took part in the counter-demonstration.