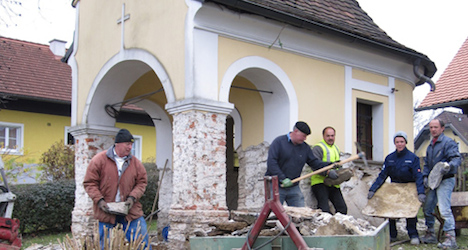 What may be Europe's first drive-in chapel officially opened on Sunday in the Styrian town of Rassach.

Known as the "Park+Pray Chapel", the church is the brainchild of former Rassach mayor Gernot Becwar, who had a vision of catering for the spiritual needs of motorists.

Together with German actor Hans-Jörg Karrenbrock, the voice of Captain Iglo, Becwar developed the idea while attending a time-management course.

Originally slated for opening in 2012, renovation of the previously rather dilapidated chapel on the busy B76 state highway has been stalled several times due to lack of funds.

It was only through strong community donations that the necessary 31,000 euros was raised to complete repairs to the now 24-hours-a-day chapel.

The six square-metre church will not host services, or be attended by a priest, but is rather intended as a place of quiet reflection and prayer.  Visitors will be encouraged to write down notes of prayer or gratitude, which can be left in the chapel.