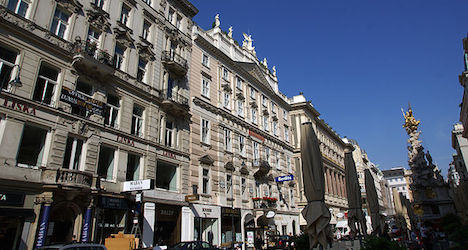 The Graben, one of Vienna's most exclusive shopping streets. Photo: Wikipedia

According to the weekly magazine Format, Russian tourists are avoiding Vienna and its sister cities.  They suggest a drop of around 30% in business, as noticed by local retailers who usually cater to the Russian tourism market.

"We are experiencing a significant decrease in the frequency of Russian customers," says Rainer Trefelik, owner of the luxury fashion house Popp & Kretschmer, reported Format.

Some retailers suggest that the Russian sanctions are biting, but EU ministers have only 61 Russian and Ukrainian persons on their current sanctions list, which targets named individuals for asset freezes and visa bans.  A secondary effect may related to banks which have been sanctioned, which could have issued credit cards that will no longer function due to settlement issues.

"We are taking the situation very seriously," says Erwin Pellet of the Vienna Chamber of Commerce.  The Chamber estimates that Russian tourists contribute annually 60 million euros to Viennese businesses.  Further, with more than 700,000 overnight stays, they are in third place behind German and Austrian tourists in terms of importance — and were the fastest growing group.  Even more alarming is that in March alone, overnight stays fell by almost 10 percent compared to the same time last year.

A more likely explanation is that Russian tourists simply feel unwanted.  "The Russians are very emotional. If they feel they are somewhere not popular, it affects their travel and shopping behavior", says Peter Bernert, owner of the Graben business Paul & Shark.

There has been no suggestion that Russian tourists are avoiding Vienna because of Austria's win in the Eurovision song contest.