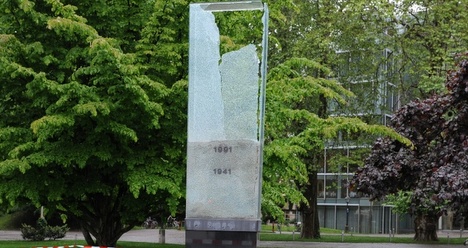 The euthanasia memorial in Salzburg. Photo: Stadt Salzburg
The memorial is located in a park near to Salzburg's famous Mirabell Palace, which also houses the local government.
City officials believe it was attacked with some force – possibly with a pickaxe. However, they are puzzled as to how the perpetrators could have got away unobserved as the glass monument is clearly visible from a busy road cose to Mirabell Palace.
The memorial was designed by Linz-based artist Otto Saxinger and built in 1991, in remembrance of the 500 people who were deported by the Nazis from the State Hospital for the mentally ill to Hartheim Castle near Linz, where they were murdered as part of 'Aktion T4' – the Nazi euthanasia programme.
In all it is estimated that a total of 30,000 people were murdered at Hartheim by carbon monoxide poisoning. Among those killed were sick and disabled people as well as prisoners from concentration camps.
The memorial consisted of a glass rectangle holding a bed of sand and ash to symbolise the Nazi's victims. It has now been covered up to prevent the damaged structure being soaked with rain water.
This most recent act of vandalism is only the latest in a chain of events. In early May several Stolperstein – cobblestone-sized memorials for individual victims of Nazism – were defaced. The synagogue and the Jewish community have also been the target of attacks, as well as an anti-fascist memorial in Salzburg's cemetery.
The Caritas emergency shelter, which sometimes gives refuge to beggars from Romania, was also smeared with Nazi slogans.
Salzburg's Green party has criticized the police, saying that Nazi graffiti is now commonplace in the city and not enough is being done about it.
"We call on the state's police director to provide sufficient staff so that these crimes can finally be stopped and the perpetrators apprehended," it said in a statement.
Salzburg Deputy Mayor Harald Preuner (ÖVP) has said the monument will be speedily repaired "as a clear sign".