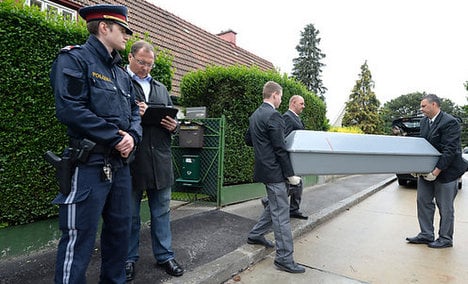 The scene of the shooting in Vienna. Photo: APA

After undergoing emergency surgery "her situation remains life-threatening", a spokeswoman from the Emergency Hospital in Meidling, Vienna, said. "She will remain in the induced coma for a week." The woman was apparently wounded during a dispute with her much older ex-diplomat husband, who then shot himself in the head with his revolver. The injured woman ran into the front yard of their home in Weitmosergasse, in Vienna's Favoriten district, where neighbours alerted police and ambulance services. The couple met in Venezuela's capital, Caracas, where he was posted as a diplomat and she worked as his housekeeper. According to neighbours he often bullied his wife and was reported to be prone to fits of alcohol-induced rage.