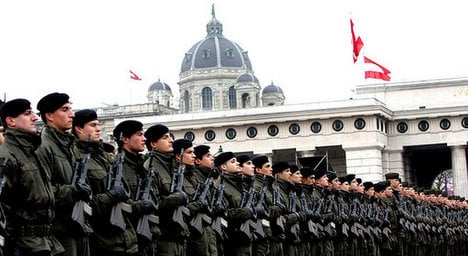 Members of the Austrian army in Vienna. Photo: APA

Defence Minister Gerald Klug (SPÖ) has said that with its current budget the army "is no longer financially viable".

His staff have done an analysis of the army's current saving plan and found that by autumn it won't even be able to afford its fuel bill.

This year it will have zero investment, which means that the army won't even be able to afford to replace a broken tent pole, according to a report in the Kurier newspaper.

A project to build new barracks in Melk has been scrapped.

The army's Black Hawk helicopter fleet is also in danger. It's in need of an urgent update from manufacturer Sikorsky but this will cost between €50 million and €80 million. Otherwise, the helicopters will be night blind from 2018, and by 2020 they will no longer be able to fly.

The army has already dramatically reduced its vehicle fleet, and major repairs to Pinzgauer and Puch-G vehicles have been put on hold as the parts are too expensive.

In Klagenfurt vehicles are so scarce that soldiers in the 7th Brigade are forced to walk everywhere – which has not been good for morale.

The army is often deployed in Austria to deal with severe flooding – but initially only a fifth of its forces will be released, according to Kurier.

Defence Ministry spokesman Michael Bauer admitted that "the cuts are very painful, but there is no way around it."

The army has urged politicians to make military service and careers in the military more attractive.

Military service is mandatory for all able-bodied Austrian men up until the age of 35 – for a period of six months. Conscientious objectors can join the civilian service (Zivildienst) for nine months.

Women have been able to do military service voluntarily since 1998.

Last year a referendum on conscription rejected a proposal to end military service. Although the referendum was non-binding, the governing coalition has pledged to honour the results.