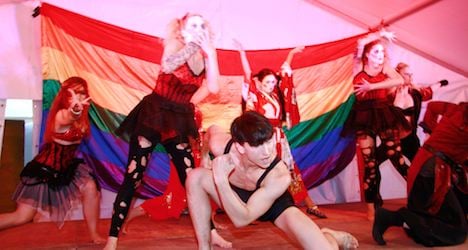 Even before Conchita Wurst's Eurovision triumph helped burnish Austria's tolerant image, Vienna was already popular with gay tourists, attracted by the mix of high-brow culture and history – and also fun.

"You won't see bare bottoms or smutty word plays like you do for other cities. Vienna is sticking to its brand- classical and elegant," the city's tourism chief Norbert Kettner told The Local.

"If you just want to party 24 hours a day, there are better cities. But if you are interested in quality cuisine and culture – and also partying – then you should come to Vienna."

Vienna's baroque imperial splendour, UNESCO-protected cafe culture, world-class classical music and over 100 museums have long made it a hit with tourists straight or gay.

In the last decade the number of overnight stays by visitors sampling Schoenbrunn palace, Sachertorte cake or Klimt's "The Kiss" has rocketed 60 percent to almost 13 million in 2013.

The tourist board has made a point of trying to attract gay tourists, with a special guide and a Facebook page called "Gayfriendly Vienna" – currently fronted with a photo of Conchita Wurst.

And it has paid off. In January, 80,000 people voted Vienna their favourite cultural destination on the website GayCities.com, which calls it "one of Europe's great gay cities".

And as the website highlights, there is also fun to be had after dark, with plenty of fetish parties, saunas and gay clubs "to keep even the most energetic boy or girl happy".

"Vienna has a pretty formal image but it also has a good gay scene. It offers everything from simple bars to sex clubs," Irish visitor Brian Melaugh, 47, told AFP on his second trip to the city.

Sitting off the famous Naschmarkt market at the Cafe Savoy, a venerable gay institution in Vienna, he concedes however that the average age is perhaps higher than other, racier destinations.

"Lots of older gays come to Vienna. Younger ones go to places like Ibiza," he says.

Conchita Wurst's victory at Eurovision was as much about tolerance as it was about music, and gay visitors certainly find the Austrian capital of 1.7 million people an accepting place.

In particular, people from nearby eastern Europe find it a safe haven, says Boyan Dervishev, the manager of Cafe Savoy who arrived in Vienna from his native Bulgaria 26 years ago.

Gay visitors from eastern Europe appreciate the "normality," he told The Local. "If they embarrass themselves, it's not a scandal," he says.

The city also has several gay events including the five-day Vienna Pride, which this year culminates on June 14 with a march of around 100,000 loud and proud members of the LGBT community.

In addition, Vienna city hall hosts the Life Ball, an annual event that over the past 20 or so years has become one of the world's best-known AIDS charity events.

This year's outlandish extravaganza on May 31 – with the theme "Love is a Bloom Growing Anywhere" – is due to be attended by former US president Bill Clinton and singer Ricky Martin, among others.