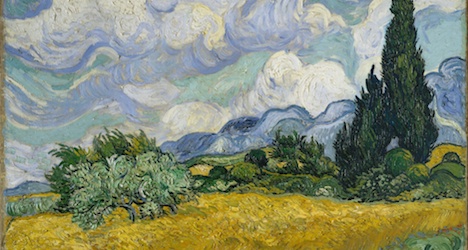 A different Van Gogh from the same period as the 'new discovery'. Photo: Wikimedia

The painting turned up in the safe of an alleged tax fraudster in Spain, when Spanish officials opened one of his safe-deposit boxes, as reported in The Local Spain last week.

Reports said that the painting was last examined by the Art History Institute of Vienna University, but Dr. Friedrich Polleroß, head of the archives at the Institute, denies this and expressed doubt about the alleged authenticity of the painting.

The painting has three seals on the back. The first one is stamped April 8, 1944, at the Rijksmuseum in the Netherlands, dating back to Nazi occupation of the country.

The second seal indicates that the painting was taken from the Rijksmuseum to the Museum der Schöne Künste in Berlin. And the last seal – dated April 10, 1975 – suggests that it belongs to Vienna's Art History Institute.

But Dr. Polleroß told The Local that Vienna University did not use a system of stamping art work, and that he believes the seal is a fake.

He added that "there was no report in our archives relating to such a painting, by Van Gogh or any other artist". He also has no records of seeing such a painting in Vienna's Art History Museum, he added.

An additional red flag is that Vienna University already received an inquiry about this painting from the Criminal Police of Berlin in November 2013, suggesting that the full story is as yet untold.