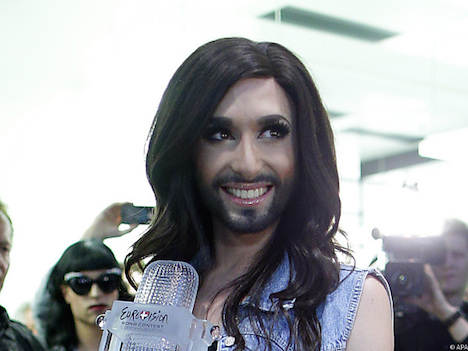 "This will remain an issue for a long time and I fear I won't see the end of it in my lifetime," said Wurst, who captured Europe's imagination at this year's edition of the song contest.

"It will be my life's work and I gladly take it on," the 25-year-old drag queen, who is also known as Tom Neuwirth, told reporters in Vienna.

"Yesterday was not just a victory for me but a victory for those people who believe in a future that can function without discrimination and is based on tolerance and respect."

Wurst's participation in the contest had sparked controversy ahead of the finals in Copenhagen, with petitions running in Belarus, Russia and Ukraine for her to be dropped from the competition.

Her win was also greeted by an outpouring of scorn from Russian politicians and stars.

But at Vienna airport, the waifish singer was greeted Sunday by a jubilant crowd that went wild when she stepped into the arrivals terminals in a flowing pale pink skirt and jeans vest.

At least 1,000 fans — some of them wearing painted beards on their face, including women and children — had been waiting for hours, playing Wurst's anthem "Rise like a Phoenix" non-stop and singing along at the top of their lungs, while waving Austrian and rainbow signs and banners that read "We love you!" and "Conchita Queen of Love + Tolerance".

Surrounded by an international media scrum, she lifted her Eurovision trophy in the air and smiled to the cameras.

"I don't really feel vindicated (against her critics). I believe everything happens for a reason," she said afterwards.

She insisted she was no "ambassador of tolerance… I'm just doing my little bit. This is what I was given and I feel it's my duty as an artist to work in that direction."

After her win on Saturday, Wurst cried out: "We are unity, and we are unstoppable."

"That was obviously meant for certain politicians whom we all know," she explained in Vienna. Asked if she meant Russian President Vladimir Putin, who last year signed a law banning "gay propaganda", she replied coyly "among others".

"It's the end of Europe"

Wurst's unusual persona sparked a backlash from eastern Europe and her win saw an outpouring of anti-gay anger from Russian politicians and stars on Sunday.

Russian nationalist politician Vladimir Zhirinovsky meanwhile predicted: "It's the end of Europe… They don't have men and women any more. They have 'it'."

But Wurst retorted that parents should just tell their children: "He's a young man who wears women's clothes and he wants to show that you don't need to be made fun of for that.

"I think if you say that, kids will understand. Children are far more mature than you might think," she said.

Austria erupted in joy Saturday as Conchita brought the country its first Eurovision victory in 48 years.

One local radio station played "Rise like a Phoenix" on loop 48 times over four hours on Sunday in honour of the win.

Further afield, stars like Lady Gaga and Boy George have also tweeted their support for her.

Cracking jokes, the "bearded lady" as she likes to call herself charmed the media crowd.

"I'm always asked when I first realised that I'd won. Next week I think," she said with a flutter of her long fake eyelashes. 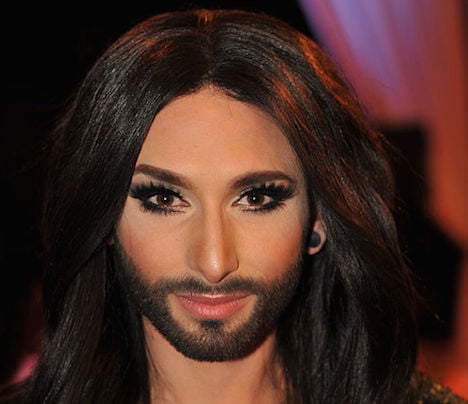 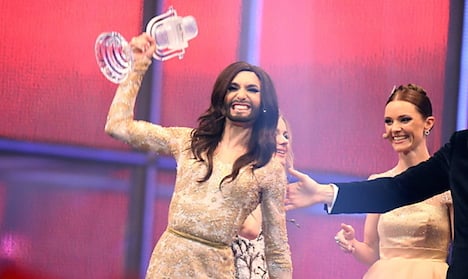