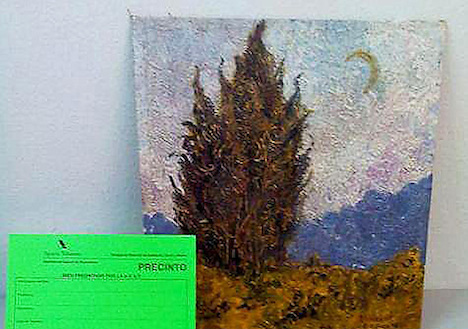 There's no statute of limitations on art theft, so Vienna's Art History Museum will be delighted to learn that a painting by Dutch painter Vincent Van Gogh that went missing forty years ago has been discovered by Spanish tax inspectors.

The inspectors were opening safes that had been seized from various tax fraudsters, when they found the unframed painting.  Depicting cypresses and fields, the painting was dated from 1889, and has not been valued, but is expected to be worth millions, as with most other Van Goghs.

The picture was likely completed during Van Gogh's stay in the Saint-Paul Asylum in Saint-Rémy, Provence, shortly after the incident with Paul Gauguin in which Van Gogh cut off part of his own left ear.

The safe-deposit box supposedly belongs to an unnamed foreign millionaire, and arrived in Spain in 2010.

A seal found on the rear of the painting showed that it had been examined by the Institute for Art History at the University of Vienna on 10 April 1974.

Despite the clear provenance, Austria's Art History Museum is unlikely to get the painting back, as the Spanish government has form in regard to holding on to seized works of art and other valuables.