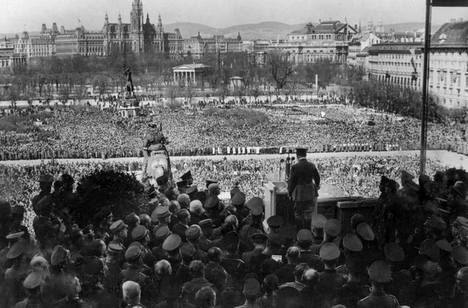 Hitler speaking to the masses on Heldenplatz, 1938. Photo: Wikimedia

The SORA Institute poll for the Austrian Future Fund has found that 29% of Austrians are keen to have a "strong leader who does not have worry about parliament or elections".

Support for a strong leader has doubled since 2007, the survey found. The results were released on the anniversary of Nazi Germany's capitulation in 1945.

Historian Oliver Rothkalb, from the Institute of Contemporary History at Vienna University told Der Spiegel that he believed "socio-economic apathy" was behind the longing for a strong leader. He acknowledged that it was "a significant trend".

Cheering crowds greeted Adolf Hitler in Austria after Nazi Germany's annexation of the country in 1938.

It took until 1991, more than four decades after the war's end, for Austria to formally apologize for its central role in the Third Reich and Holocaust.

In the SORA poll of 1,015 Austrians aged 15 or older, 43% still saw Austria as the first victim of the Nazis, a decrease from previous years.

Half of those polled thought National Socialism was completely or mostly bad, while 30% thought there were some positive aspects of the regime.

However most Austrians rejected the idea of an authoritarian system, with 85% responding that "democracy is the best form of government, although it may bring problems with it".

More than half of Austrians think it is time to end the discussion of the country's role in World War Two and the Holocaust.