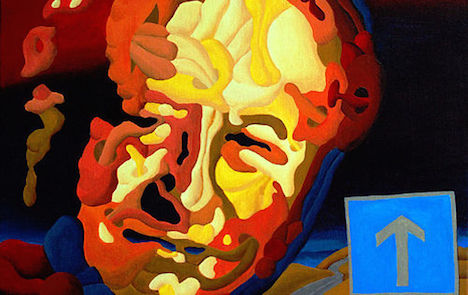 The Socialist Party of Austria (SPÖ) called in police last week, when they discovered a portrait of their former leader and Austrian Chancellor, Bruno Kreisky, was missing from the lobby of their offices in Linz.

A security camera recorded an elderly man taking the picture from the wall, leading the SPÖ to broadcast an appeal for its return.  Despite the request, and an associated threat of legal action, the painting was not returned.

"On Wednesday, a 62-year-old man visited, who gave his name and has been known to steal," club spokesman Andreas Ortner told the Kurier newspaper, adding that he appeared "confused."

The man told the SPÖ that he had thrown the picture in a nearby stream.  He was neither willing to return the painting, nor to make reparations on the value of the painting, which was estimated to be 500 euros.  The SPÖ have now turned to the police, asking them to look into recovering the painting.

Bruno Kreisky was Austria's Chancellor from 1970 to 1983 as a leader of the Socialist Party of Austria (SPÖ).  As a jew, Kreisky escaped the holocaust in Austria by fleeing to Sweden in 1938, where he remained until the end of the war in 1945.  He married a Swedish woman while in exile.