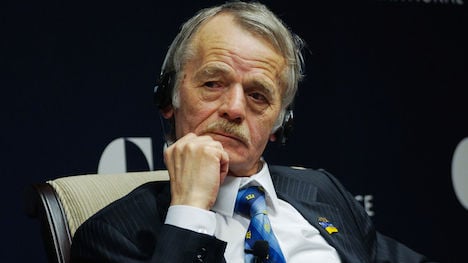 The spiritual leader of Crimea's Tatars has appealed to the international community not to forget the Black Sea peninsula, annexed by Russia, as attention has turned to growing violence in eastern Ukraine.

"We are concerned that because of Russia's recent actions, the issue of Russia's occupation of Crimea has become secondary in light of the potential threat of Russian forces invading across the eastern border of Ukraine," Mustafa Dzhemilev, spiritual leader of the ethnic Tatar community in Crimea, said in Vienna.

"We are in favour of being part of the Ukrainian nation, we reject this annexation," he said.

"We are hoping that the international community will not forget about the occupied territories of Ukraine," he added in a meeting with the European security body OSCE, which has been monitoring the situation in Ukraine.

Following Russia's formal annexation of Crimea in March – a move condemned by Kiev and Western capitals – the local population has been given the choice of taking Russian citizenship, reported Agence France-Presse (AFP).

But Dzhemilev insisted that Crimean Tatars, who make up about 12% of the peninsula's population and mostly back the government in Kiev, were being effectively forced from their homes.

"There is an emerging trend to evict those Crimean Tatars out of Crimea who refuse to recognise the annexation. Crimean Tatars are being forced into the situation where they would rather leave their homeland."

"The indigenous people of Crimea have become foreigners in their own homeland," he concluded.

Tatars had been subject to mass deportations to central Asia ordered by Stalin in 1944. Nearly half of them died of starvation and disease, while the rest only began returning to Crimea in the late 1980s.

Amid rumours that Moscow plans to disband the Mejlis, the Tatar assembly, Dzhemilev said there were no specific signs yet but "you can expect everything from the occupying power."

A Ukrainian lawmaker and hugely respected figure among the Tatars, he has lately been banned from entering Crimea by local authorities.

An attempted return last weekend prompted clashes at the border between Tatars and Crimean authorities.

But Dzhemilev said Thursday he would keep trying to reenter the Black Sea peninsula: "We will not let the occupiers enjoy peace."