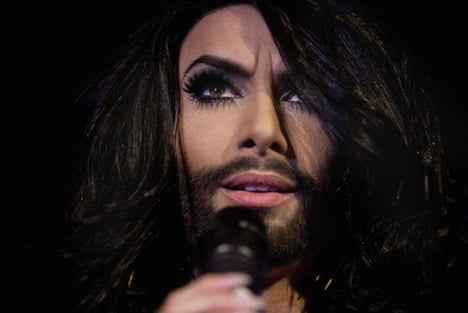 Austria's bearded drag queen Conchita Wurst hogged the limelight ahead of Saturday's Eurovision Song Contest final, but things had become a little hairy for her among socially conservative Europeans, including some gays.

"I created this bearded lady to show the world that you can do whatever you want," said Wurst, the drag persona of 25-year-old Austrian singer Tom Neuwirth.

"If you're not hurting anyone you can do whatever you like with your life and, it's so cheesy, but we've only got one (life)," she added.

Wurst's James Bond theme-like ballad 'Rise Like a Phoenix' was widely expected to make it through Thursday's semi-final in the Danish capital, but few pundits believed she would take the Eurovision crown.

However, comments by Armenian Eurovision hopeful Aram MP3 – one of the bookies' favourites this year – that Wurst's lifestyle was "not natural" have boosted her profile, even though the stand-up comedian later claimed his comments were a joke.

"He apologized by saying his comments were a joke and badly translated," Wurst said.

"I have to say that if it's a joke it's not funny… but he apologized and that's fine for me," she added.

There have also been petitions to have her removed from the competition in Ukraine, Belarus and Russia, where a law banning "gay propaganda" was signed by President Vladimir Putin last year.

St. Petersburg lawyer Vitaly Milonov reportedly asked his country's Eurovision selection committee not to send any Russian musicians to the event, which he accused of being "blatant propaganda of homosexuality and spiritual decay".

The outrage highlights a cultural divide between eastern Europe and the countries of the west, where the camp spectacle's large gay following is often acknowledged by organizers, local businesses and performers.

The city of Copenhagen has said three gay couples from Russia will get married there in the days leading up to Eurovision as part of an event celebrating 25 years of same-sex unions in Denmark.

Wurst said her own song reflected the experience of growing up as an outsider in rural Austria.

"It's a story of going through bad times and struggling through difficult things, and growing out of it and hopefully becoming a better person," she said.

"For me of course it's so close to my life… emotionally, growing up," she added.

Her creator, Tom Neuwirth, rose to fame after finishing second on Austrian talent show Starmania in 2006, after which he joined a short-lived boyband.

Conchita Wurst first appeared in 2011, when she made it to the final of another reality show. The following year she came second in the TV programme that selects the central European country's Eurovision entry.

Although much of the controversy over her appearance has centered on eastern Europe, it hasn't always been smooth sailing in her home country.

The leader of the right-wing FPOe party, Heinz-Christian Strache, called her "ridiculous" and threw his support behind another singer, Alf Poier, who suggested she needed psychiatric help.

"If someone doesn't know if they're a man or a woman, they should go to a psychotherapist rather than to the song contest," Poier was quoted by Austrian media as saying.

A German-language Facebook page protesting the decision to send her to Copenhagen has garnered over 38,500 "likes".

There has also been concern among some members of the gay community that her hirsute drag persona could "scare" people coming to terms with their own sexuality.

"A lot of people say: 'I'm also gay but I don't need a beard and a dress to express that,'" she said.

"I can just say to those who don't really realize yet if they are gay or not, you know, and a bit scared of this change: I don't want to scare them.

I just want to show them that they can be accepted in any way. They are allowed to do anything," she added.