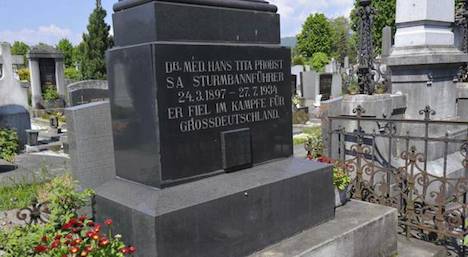 According to Austrian broadcaster ORF, the owner of a cemetery plot in Graz with a tombstone dating from the early 1930s had been told by police to permanently hide the swastika, or face a 4,000 euro fine for displaying a Nazi symbol.

The tombstone originally belonged to a medical doctor named Hans Probst, who was a prominent member of the Nazi party before his death in 1934. Probst held the rank of Sturmbahnfuehrer (Major) in the Sturmabteilung (Brownshirts), the paramilitary wing of the Nazi party.

Under an Austrian law enacted in 1947, Nazi regalia and symbols may not be publicly displayed – with very few exceptions.

The German owner of the tombstone commissioned a local stonemason to prepare a cover to hide the symbol. He expressed his amazement that the symbol has been sitting there for 70 years, saying he was "astonished" that it took authorities so long to act.

Police claimed that they acted after several complaints from visitors to the cemetery. Originally, Graz prosecutor Hans-Joerg Bacher ruled that the 1947 law did not apply to depictions created prior to that year. Jewish sources in Vienna voiced frustration with that opinion, saying that Austria was generally reluctant to enforce such laws.