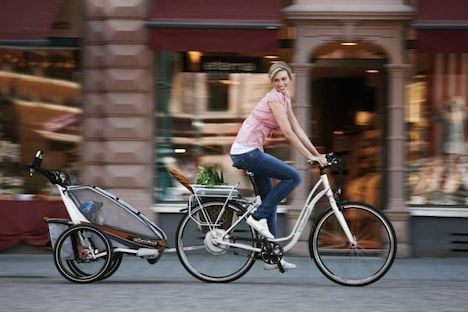 Photo: VCÖ/www.diamantrad.com
The bikes have grown in popularity in Austria since their introduction in 2008, with more than 150,000 now in service.
The socialist SPÖ and Green parties see electric bikes as an important part of a coherent public transport and emissions reduction strategy, offering alternatives to those who aren't keen on regular pedal power.
But right-wing politicians from Austria's Freedom Party complain that investing in the necessary infrastructure for new cycle paths is a waste of money.
FPÖ transport spokesman Toni Mahdalik criticized a decision by the "red-green" (socialist/green) coalition in Wednesday's city council planning meeting.
"The SPÖ and Greens want to burn a whopping 306,000 euros to add an unnecessary 300 metres to an existing cycle path. In addition, this will destroy 13 much-needed parking places in the side street at the Hotel de France."
"With the new traffic lights for cyclists… there will be an additional cost of 441,000 euros," criticized Mahdalik.
Vienna is already considered one of the top "green" European cities due to its extensive fleet of electric trams and comprehensive subway system.  It is further enhancing its environmental credentials through the recent addition of six hybrid buses to its fleet, which will enter into service on its 4A line.
Cycling is very popular in Austria, and e-Bikes are extremely efficient in their use of energy. The equivalent calculation means that a typical e-Bike will complete 2,000km with 3 litres of gasoline.