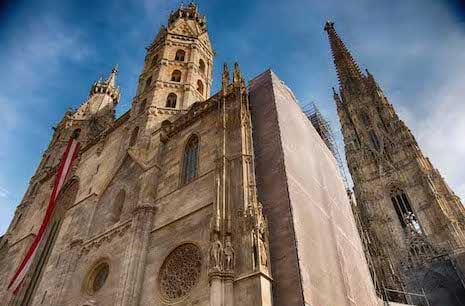 Urbanists adore Vienna. It is, by one quality-of-life study, the most livable city in the world. According to our friends over at Co.Exist, it's one of the smartest cities in Europe.

Now, in New York magazine, Justin Davidson argues that New York City should embrace Vienna's superior model of housing as a method of social justice. "If de Blasio is serious about making New York not just pleasant but just, he ought to go on a scouting trip to Vienna," he writes. Why is Austria's capital such a hotspot for urbanist obsession?

Vienna builds around 5,000 units of affordable public housing per year. Somewhere in the range of 60% of its population lives in public housing. And you know what? It's beautiful. Unlike the U.S., where public housing too often looks like a series of soulless fortresses, subsidized housing in Vienna is colorful, unique, and occasionally filled with amenities like rooftop pools and Finnish saunas. “You cannot win a project for housing in Vienna if you don’t meet a high planning and architectural level," Pratt professor William Menking told Davidson, "and none of it is out of reach in terms of quality for New York City."

Vienna understands that well-designed residential architecture is not a luxury, it's a social need. "When every dollar has to multitask, when saving money on lighting bills frees it for better windows, when a hallway needs to double as a social space–that’s when inventive design becomes an urgent necessity," Davidson writes.

In the early 1990s, Vienna instituted a policy called gender mainstreaming, aimed at providing equal access to city resources for both men and women, who don't always use the city in the same way. Clare Foran wrote in the Atlantic Cities in September that this approach is reshaping the experience of the city for its residents.

More than 60 pilot projects have been carried out, such as a housing complex designed by women with an on-site kindergarten, doctor's office, and pharmacy. Other projects include improved street lighting for safety and parks redesigned to encourage more equal access. "It’s become a way of changing the structure and fabric of the city so that different groups of people can coexist," Foran writes.

Vienna is the third smartest city in Europe, as climate strategist Boyd Cohen writes at Co.Exist. This means that the city uses information technology to improve the efficiency of city operations and the quality of life of its citizens. A public-private partnership called TINA Vienna develops smart solutions for the city, like a crowd-funded Citizen Solar Power Plant, which is a former slaughterhouse-turned-startup-center. They've also expanded their electric vehicle charging network and have been experimenting with electric car sharing and electric bike rentals.

You know what totally kills an urbanist's boner? Cars. But Vienna, dreamboat that it is, has an awesome public transportation network (deemed one of Europe's best) with buses, trains, trams, and subways.

Its transit is also balanced in favor of gender equality. In 1999, as part of the gender mainstreaming plan, city officials asked men and women how they used public transit. Women, who were more likely to run errands and take care of children and family members, used public transportation more frequently and at different times than men. In response, Vienna's city planners made an effort to improve transit access and pedestrian mobility.

Because so many people use public transportation, city housing has started ditching parking requirements. Vienna's car-free residential projects ask residents to commit to living without a car upon signing the rental agreement. Though the city still requires most developers to build a parking space for each residential unit, the car-free projects and developments like Bike City have managed to build without dedicated parking spots.

A city designed for affordability, sustainability, gender equality, and easy transit? Might be time to call the movers.