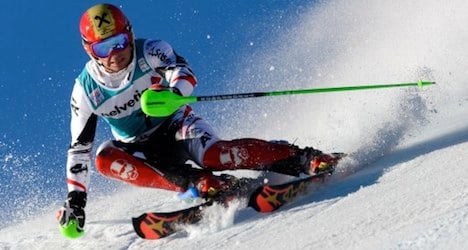 The world slalom champion clocked a combined total of one minute, 49.75 seconds to finish 0.29 seconds ahead of Sweden's Andre Myhrer, with Norwegian Henrik Kristoffersen completing the podium 0.66 seconds behind.

"It is really a tough hill, but it is always amazing to ski here in Adelboden," Hirscher said after the race held in balmy spring-like conditions in the Bernese Oberland that left the course slushy in parts.

"I have to say as tough as it was to ski the course today, I can't imagine how hard it was to prepare the course with the temperatures over ten degrees Celsius.

"That was definitely not easy, so thank you to the team who made it possible."

The victory was Hirscher's fourth this season and 22nd of his World Cup career.

The 160 points the Austrian accumulated this weekend lifted him to 675 points, leapfrogging Norway's Aksel Lund Svindal (652) atop the overall standings.

The duo sit far ahead of third-placed American Ted Ligety (333), in a battle for the final podium place with France's Alexis Pinturault (326), Germany's Felix Neureuther (311) and Austrian Hannes Reichelt (296).

Neither Ligety nor Neureuther completed the slalom here, the German unable to build on his shock win in Saturday's giant slalom and previous slalom victory in Bormio.

Second-placed Myhrer was left delighted with his podium placing.

"It has always been a tough race for me, so to get a podium today is really great for me," the Swede said.

"It was a fight all the way down, but I had a pretty good feeling. It's good to get some confidence before (the Winter Olympics in) Sochi, but we have three more races before that, so my focus is on those."

The 19-year-old Kristoffersen dubbed Adelboden as "one of the classics".

"It's a spectacular hill and when you come into the final hill and see the huge crowd its pretty amazing," the teenager said.

"This finish definitely ranks pretty high on my list."

The men's World Cup tour now moves across the valley to Wengen, another resort in the canton of Bern, where the famed Lauberhorn course awaits the skiers.

Colder weather and snow are forecast.